Premier and Minister of Intergovernmental Affairs of Ontario

I would like to address the issue of waste created by a resident of the Curve Lake  Reserve, namely Mr. James Whetung’s rice fields in Pidgeon Lake, as well as in several other Kawartha Lakes.   We have been living, not just cottaging, on the South East shore of Pigeon Lake since June of 1994.

The waste issue has been overlooked within the greater issues with Mr. Whetung revolving around the Williams treaty of 1923.  (I refer you to the attached letter by Mr Larry Wood to The Hon Justin Trudeau Prime Minister).

Since I was a kid growing up in Germany, I’ve always had empathy for the plight of the North American Indigenous People.  So I can state right here that I support him in his endeavour to pass on the tradition of harvesting the wild rice in their traditional way, to his people and others who are interested.

However, I take great issue with the manner in which he’s going about it. 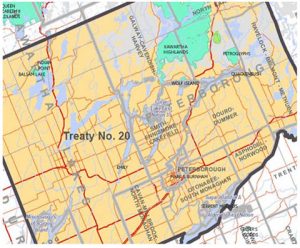 He has voiced his intentions to seed most of the lakes within the boundaries of the Williams Treaty.

In 1994 there was no evidence of any rice any where near us.  We understand that in 2011 there were approx. 200 acres, today there are in excess of 1500 acres, and there seems to be no end in sight.   This begs the question: how much rice does he need to traditionally harvest it by canoe?  He has thrown tradition out the window.  He is harvesting using an airboat, typically used in the Florida everglades.  A most noisy piece of equipment.

At the end of harvest sason a lot of his dying crop disintegrates and washes up on our shores.   These mats of waste consist of strands of thick and very strong rice grass which has been uprooted by wave action as well as by adjasent boat trafic.   Most of these strands are 8ft. long, knitted and woven together into a mass thick enough to touch bottom, which is 3 to 4 ft. deep at our shore.  They can reach out to 50ft. from shore.

Once the heavy job of forking it out of the water is donewe have to get rid of it.  Fortunately we have a place on our property where we can dump it.  If we did not have this space we would have to truck it to the dump and pay for doing so.

I am 75 years old, my wife is 71.  I have Parkinson’s Disease. To get rid of this mess is a big job, as witnessed by the attached photos.  This is not a onetime thing, but rather has to be repeated several times throughout the season.

I remember one member of our Initiative telling me that once he confronted Mr. Whetung about the clean up, he was told that he should just hire some of

Mr. Whetung’s neighbours to do it!  In effect he is running a commercial enterprise, and as such, he should abide by some rules that I’m sure his mother must have taught him, namely one being: clean up after yourself!

The option of just leaving them in the water is not tenable.  It doesn’t take long for the whole thing to turn into stinking, rotting mess right into winter.  In the spring once the ice is gone, we find the lake bottom in front of us all covered in the remains of last years mess.

He is running a commercial business, Black Duck Wild Rice, and by all indications not very well.  He is a one man show, concentrating on playing in the mess he’s creating on the waters, making it very unpleasant for the rest of us.

Pat and I are not by a long shot the only ones affected by this man’s behaviour.

May I referr you to the “Save Pidgeon Lake” web site www.savepigeonlake.com

Mr. Larry Wood, Spokesperson for the “Save Pigeon lake Initiative” has been in touch with all levels of Government since 2011, without any success in gaining help regarding this problem.  When contacted, Hon. Maryam Monsef, our MP has shown little interest.  I’m afraid Mr. Whetung’s attitude does not bode well for the Reconcilliation Process underway in Canada at this very moment.

It is for this reason I am writing you now, to respectfully appeal to you to put some weight of your office onto this matter.

Thank you for your consideration.

We have read with interest the reconciliation process and the settlement between the Governments of Ontario and of Canada. Of particular interest to us, shoreline stakeholders residing on the shores of Pigeon, Buckhorn and Chemong lakes in the Kawartha’s, is that the harvesting rights of the First Nations remained.

As proud Canadians we respect the need for Reconciliation and hopefully it will move forward in an honourable way, respecting  each other, resulting in a stronger Canada.

Unfortunately, we are concerned that respecting each other and reconciliation may not be possible in the present environment.

We reside near The Curve Lake First Nations Reserve and are quite familiar with the Williams treaties harvesting guide which states; ” First Nations have traditionally harvested for medicine, food, social and ceremonial purposes, including but not limited to harvesting of manomin-wild rice, wiigwaas-birch bark, miinaan-berries, medicinal plants and maple syrup.  The harvesters of the Williams Treaty First Nations recognize the importance of conservation and protection and will only harvest for personal and community use.”

We do not have any issue with the above; however, not all First Nations people who gather wild Rice, honour the Williams Treaty Harvesting guide which brings us to the reason we are requesting your assistance.

Mr. James Whetung of the First Nations Curve Lake Reserve, well known for his quest to fill the lakes with wild Rice, has admittedly seeded the lakes with thousand of lbs of rice expanding the rice fields on Pigeon Lake from approximately 200 acres in 2011 to in excess of 1500 acres today. He harvests the rice to sell commercially on line through Black Duck Wild Rice, as well as to people in markets and to wineries. His method of harvesting (farming) is by an airboat with  a sound decimal exceeding 100.

We have been in contact with all levels of Government since 2011, no action, just promises that their working on solutions. Seven years later still no answers from our Government. The following questions have gone unanswered.

Parks Canada has cancelled the permit. Although you, like myself are disappointed with this result I believe it would be in our best interest to respect the cancellation and cease to do any further cutting this year.

Last week’s meeting resulted in a positive step towards finding solutions to the rice proliferation in the Trent Severn Waterways. I am encouraged that Parks Canada and the First Nations have agreed to further talks. Hopefully, these talks which are to commence as soon as possible will take into consideration the needs of the First Nations and all of the people who have enjoyed the Trent Severn waterways for over a century. Solutions can be found if we all work together.

Thank you for your support and your respectful consideration in honouring the cancellation of the rice cutting permit. You may be assured we will continue to express your concerns to all levels of Government impressing on them their responsibility to find a solution to the deliberate seeding and commercial harvesting in Federal Waterways which is causing irreparable harm to us all. If you have any questions please contact me at savepigeonlake@gmail.com