Pigeon Lake residents among those frustrated with noisy harvesting practice 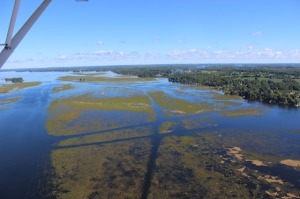 KAWARTHA LAKES – Waterfront homeowners on Pigeon, Chemong and Buckhorn Lakes say struggles with navigation, along with the noise coming from airboat rice harvesters, have led to “an ongoing nightmare” for too long now.

They’ve convinced the Township of Selwyn to act. Now Kawartha Lakes is getting in on that too.
Mayor Andy Letham has asked council to support a resolution from Selwyn Township calling for time limits on harvesting, quieter methods to do so, and a ban on carrying out rice harvesting on Sundays. As well, it asks Parks Canada to continue to consider applications on aquatic vegetation removal “to allow waterfront property owners to make use of the waterway.”

This issue isn’t a new one for Pigeon Lake waterfront owners. James Whetung, a First Nations member and owner of Black Duck Wild Rice, has harvested wild rice for more than a quarter century. He harvests and collects the rice, and provides an educational opportunity for those looking to learn more about the process. According to his website, the rice is sold through a small-scale commercial operation.

But some say it affects their time on the water. Pigeon Lake resident Joanna Augustyniak wrote Selwyn Township stating the harvesting is happening seven days a week, six hours a day.
“The situation has been terrible this year and Mr. Whetung is showing no respect for our rights.”

Coun. Heather Stauble spoke in favour of backing the resolutions put forward by Selwyn. Speaking at council on Oct. 10, she said it’s not an issue this council can solve. It needs to be dealt with between the “First Nations” and Parks Canada. But the City’s resolution to back Selwyn Township will help make it clear this is something that they need to address, she said.
by Bill Hodgins